At its annual conference on September 20th, Maine Genealogical Society was pleased to recognize Bob Chenard’s contributions to the genealogical community. He was presented with the 2008 Award of Excellence in Genealogical Service.

For those not familiar with Bob, let’s run down a few of his contributions: 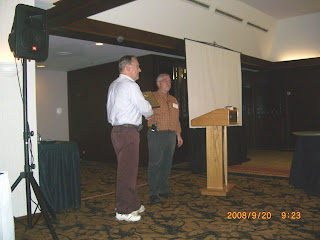 Bob has been a member of the Taconnett Falls Chapter of MGS since 1992 and has held the position of Vice-President twice. He is currently serving as VP Director in the Maine-Franco American Genealogical Society of Auburn/Lewiston.

He has compiled computer listings of over 100,000 Franco-American marriages in over 700 family surnames, most of which are tied back to the original European ancestors of the 16th and 17th centuries. These listings are freely available for researchers visiting the Taconnett Genealogical Library in Winslow.

He has published a 3-volume set of parish records for the oldest Catholic parish in the Waterville area covering the period 1830-1975; and has also published the parish records of St. Joseph’s in Old Town.

Bob has authored several articles that have appeared in a wide variety of publications. In the FORUM published by the University of Maine’s Franco-American Center you will find several of his family genealogies since 1989. The Central Maine Sentinel published a series of genealogical and historical articles over a span of 2-3 years in the mid-1990s. He also wrote an article on French genealogical research that was included in ‘Voyages – A Maine Franco-American Reader.’

In 1997, he established a large website on Franco-American genealogy at a time when there were few such websites. His website received several awards and one national publication listed it as one of the top 100 genealogical websites.

Never tiring, he is currently in the process of compiling all the pre-1876 parish records in Beauce county, Quebec, which includes persons born as early as the 17th century and many living into the 20th century. This is a 5-year project transcribing original microfilm records into a large database. Beauce county is particularly important to central Maine’s Franco population since some 80% of the pre-1900 Quebec immigrants into that part of the Maine had roots in that county.

Bob is a frequent lecturer and instructor to adult education classes and various genealogical and historical societies around the state. Perhaps he best promotes genealogy by offering assistance and information to those in need of specialized help in finding their Franco-American roots. And we are talking anyone, anytime, anywhere! Via e-mail or you might just find him at a genealogical library near you.

Bob Chenard epitomizes what service to the genealogical community is all about.

The plaque presented is inscribed: