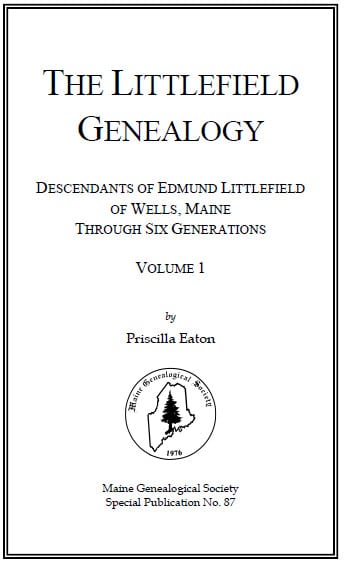 In November 2020, the American Society of Genealogists announced Priscilla Eaton’s The Littlefield Genealogy won the prestigious Donald Lines Jacobus Award. This is the highest honor in the field of genealogy for a “model” published work. Please join us in congratulating Priscilla on this amazing achievement and sending a big thank you for putting together such an impressive collection of Littlefield genealogy.

About The Book: Edmund Littlefield was a Great Migration immigrant from Titchfield, Hampshire, England. He came to America, probably in 1635, and by 1641 he was living in Wells, Maine, as one of the first settlers of that location. From his eight surviving children and at least fifty-seven grandchildren, he founded one of Maine’s most prolific families. In the comprehensive Genealogical Dictionary of Maine and New Hampshire, four pages were devoted to the Littlefields, more than to any other family. It is the rare York County family today that does not have Littlefields in its background.

Perhaps because of their large numbers, the Littlefields have never been properly documented in print. Earlier accounts treat portions of the family, but errors abound in all of them.  In this massive two-volume work, Priscilla Eaton uses twenty-first-century genealogical tools to detail the first six generations of the family in America. Her research is supported by more than 8,000 references to primary records and sources. Many of the footnotes include detailed explanations of her genealogical conclusions, often exposing errors in previous works on the family. This work documents more than 3,200 of Edmund’s descendants, with the majority living in Maine, New Hampshire, southeastern Massachusetts, Rhode Island, and Quebec. Female lines are included for one generation. Today, Littlefield descendants can be found throughout the United States.

About The Donald Lines Jacobus Award: Donald Lines Jacobus (1887-1970) was a charter member of the American Society of Genealogists and was a prolific writer. He established The American Genealogist (TAG) as a genealogical periodical dedicated to elevating genealogical scholarship by encouraging a more detailed, documented approach of primary source documentation and is recognized as the founder of the the modern school of genealogy. For all of his accomplishments in the field, he was the first person elected into the National Genealogical Society Hall of Fame.

The Donald Lines Jacobus Award was established by the American Society of Genealogists in 1972 to encourage sound scholarship in genealogical writing. Nominations for the award are made by Fellows of the American Society of Genealogists. The award is NOT given on a regular basis, but only occasionally when something rises to the exceptional standards it requires. The last time the award was given was in 2015.